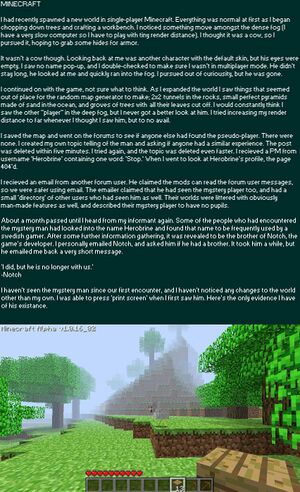 The story of Herobrine. 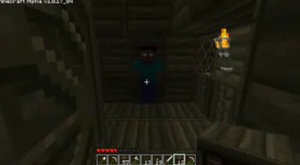 The image all Brocast viewers were redirected to at the end of the Herobrine stream.

From the original creepy-pasta, Herobrine creates random constructions, such as pyramids and long 2-block-high tunnels. He also burns down, or cuts off leaves from trees, and creates cobblestone-complexes underground, much like dungeons, lit with redstone torches.

Herobrine first appeared in a single image detailing an encounter. It was posted on a thread in the forums, and gained very little attention. It stated how Herobrine had appeared in someone's single-player game, littering the map with various pyramids and tunnels. It is the first media to name him as Herobrine.

It was only later that Herobrine grew in popularity, when the Brocast staff staged a hoax in one of their live-streams. Herobrine was introduced to the stream here (at 20:45).

Later on, there was another video showing Herobrine in a user-made lava field. The livestream went down after the player ran and saved, only to resume ten minutes later, where Herobrine had disappeared.

During this stream, the player can be heard talking to his wife, stating he was trolling, which flooded the livestream chat with outrage. The player then faked a game crash.

During this crash, all watchers were redirected to another page, featuring Steve's face, but with real, frantically rolling eyes in the place of his block eyes, modified to be completely black.

When viewing the page's source, there were a jumble of characters and letters. after removing all non-alphabet characters, the following message was revealed.

The message keeps telling the viewer to "wake up", implying they're living in a fantasy world, and this text hidden in the page is their "note".

It is widely believed all of his appearances in the stream are retextured paintings or iron doors. frames taken from the stream indicate he was very flat to the wall, making paintings the likely cause. This indicates they were using a specialised HD texture pack, but with low-res textures for all other blocks.

Since then, there has been a huge increase in his popularity, propelling Herobrine to meme status, and making him an icon of the community. There are several mods, animations, pieces of artwork and constructions of Herobrine that have been created.

Canonical
Herobrine is Notch's dead brother, somehow embedded into Minecraft. While this is the "canon", this is also completely false in reality, as Notch has no brother.

Ghost aside, there are two plausible canon theories remaining.

Herobrine shows a lot of characteristics of being a form of virus, such as manipulating game worlds, deleting threads and sending messages through the Minecraft Forums. Perhaps also hacking into Notch's email and twitter to reply on his own existence. Or, Herobrine is simply a figment of the users imagination. All users the user talked to, including Notch's email reply, could simply be the creation of the player's mind. this would also explain Notch's rejection of the canon, as showing the story is all in the user's head.

Herobrine is near-certainly inspired by Slenderman, who is also the inspiration behind Endermen.

Community
The most popular theories among users is that Herobrine is a ghost. Other theories can involve him being a higher being, a demon, a bad omen, or the suggestions in the Canonical explaination. However, most of these are written as if Minecraft itself is reality, rather than from the player controlling the avatar within the game. Herobrine canonically has not appeared in real life, and remains confined to technology.

Canonical
Herobrine is a human entity, with the exact same skin as "Steve". However Herobrine has bright white eyes that glow in the darkness, as if they are a light source.

Community
Herobrine can sometimes be seen holding tools, such as pickaxes. This stems from the widespread community belief that Herobrine was a Miner. Usually, his hands are empty.

Herobrine is often portrayed by the community as a dead miner, killed long before the player's arrival. His appearance, however, does not suggest either of these are the case. But, with Minecraft's abandoned mineshafts and strongholds, as well as Mining being a large part of Minecraft, the gameplay of the game has shaped public perception of the character to suit this persona.

Canonical
Herobrine is said to have the ability to run in Minecraft. This is indicated by the original source. The brocast stream portrays him as almost always stood up straight, with arms to his sides, watching the player. He is not seen to physically move within the brocast stream, but he moves location during the stream. It is unknown if Herobrine can swim, use Minecarts, Boats or nether portals. Like most ghosts, it's likely he simply has no use for most methods of transportation.

Community
Much like angered Endermen, Herobrine is widely believed to move via teleportation. Nearly all of the community actually reject the canon, describing him as running.

Herobrine cannot fly, and no variation states this as "canonical". However, he appears to be able to glide. Which is to say, moving in directions without physically moving, while not moving upwards. This is usually evident in retreating back into fog.

Herobrine is often portrayed with his head crooked or twitching. This is likely due to him being seen moreso as a virus/creepy entity in Minecraft, rather than a ghost.

Canonical
Herobrine is able to build and destroy in Minecraft. The original image states the player found long 2x2 tunnels, small pyramids in the middle of the ocean and trees with no leaves. The full extent of Herobrine's building capacity is unknown, but the given examples indicate Herobrine has awareness of shape, and can differentiate materials from each other.

Herobrine seems to solely target Human players. He did not seem to interact with any other mobs nearby in the brocast stream, some of which were Spiders and Zombies. His canonical relation to further mobs added since he appeared is a complete mystery. His interactions with other mobs is not mentioned in the original image. While there is a chicken present in the image, Herobrine does not seem interested in it at all, and is solely focused on the player.

Community
Herobrine has, on occasion, interacted with other mobs. He is sometimes able to take control of passive animals, and revive/spawn undead mobs

Herobrine seems able to drastically change his environments with no viable source of resources to do so. Most expansions to his abilities involves cobblestone placing, dungeon building, using redstone torches and setting traps. He exhibits all the symptoms of a Creative player in the game.

Herobrine seems unable to enter The Nether, or The End.

Herobrine's intentions vary, but they usually fall under two categories. One variation is based on pure community interpritation, while the other, based on the canon.

Canonical
In the Stalker variation, he stalks the player, disappearing if approached. This variation is derived from his origins.

Community
In the Vengeful variation, he tries to ensnare the player in traps, presumably to steal their items. He waits for people to enter his dungeons, then either seals them inside, or teleports behind them, presumably killing them. Some rarer variations of this particular version says he breaks the player's creations, and steals their items from chests. This variation is likely inspired by griefers and trolls.

Notch posted on twitter about the subject of Herobrine, early in his popularity boost.

This confirmed there was no Herobrine, but suggested Notch planned to add him at a later date.

At Minecraftcon 2010, Notch confirmed Herobrine will be in the game, probably in a "seecret friday update".

Due to increased drama surrounding the Herobrine page, a wiki administrator asked notch over IRC if Herobrine would be added:

This shows Notch has decided against adding Herobrine. However, the fact that "as is" suggested that something like Herobrine may be added, fuelling beliefs he will be added even further. So, once again, the same user asked for clarification 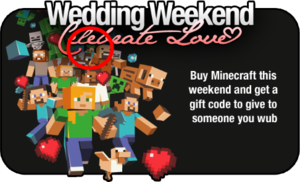 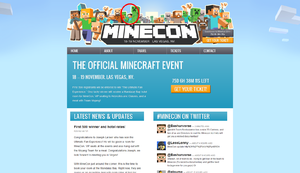 Herobrine has appeared in official Mojang images as an "in" joke.

Herobrine also appeared in the the official Minecon trailer, created by Hatfilms, at 3:11. However, as users were asked to submit their skins to appear in the trailer, this is likely not intentional.

Herobrine was also spotted at the Xbox section of Minecon. He was on the board, behind the Xbox stations.

Some users point to this as proof of his future addition. However, there is no proof he is being portrayed for anything other than baiting fans.

Herobrine also appeared in Minecraft's Facebook page, the image being the Cover Photo. It is notable to state the image was created by the fan for a competition, with the theme of "summer picnic", hence his inclusion may not be fully intentional.