The difference between Smooth Lighting on and off.

Keep in mind that light level is only one of the considerations that apply to mob spawning and plant growth. Refer to each mob's wiki page for more details. When referring to this table, please note that "Level" indicates light level and "y: #" indicates y-axis (elevation) coordinates. 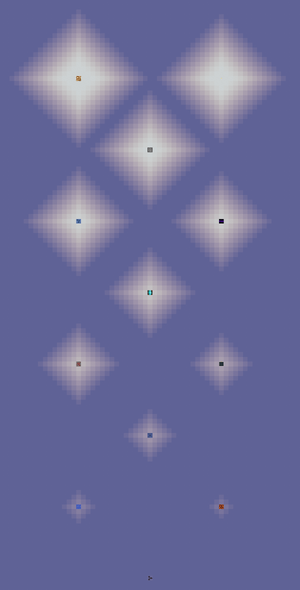 Comparison of the different light levels that blocks emit.

The minimum number of light sources needed to prevent hostile mob spawning in the Overworld is difficult to determine because light decreases in all three dimensions. Given a perfectly flat plane or floor, the cheapest and easiest solution is to place torches on the floor in a diamond pattern, with a torch every 6th block (5 blocks in-between each torch diagonally). To get a nicer looking surface, these torches can be replaced with glowstone or pumpkin lanterns embedded into the floor.

Here, the yellow "T" represents a torch on the floor, and number is the light level of adjacent floor blocks. Note that no block is less than light level 8, which means that hostile mobs cannot spawn. The green is only to highlight the 5 blocks between each torch.

However, when outdoors, if the ground level changes by even one block, this decreases light further, requiring a different pattern. Additionally, when indoors it may be more aesthetically pleasing to light sources along walls or attached to the ceiling. But this means that the light level will decrease from ceiling to floor, and the light level of the floor is used to calculate mobs spawning.

How ice affects light. Click through to see it animated between ice and water.

Solid blocks prevent the spread of light, while glass and portal interiors have no effect on light level.

All other transparent blocks reduce the spread of light. The following values are the amount each block decreases the light value. The light emitted decreases by one for each square of distance from the light source, more depending on the block it passes through.

Smooth lighting (which includes ambient occlusion as well as interpolating lighting across block faces) is the lighting engine added in Beta 1.3, with the help of MrMessiah.[1] This lighting engine is set on by default, and can be set to minimum, maximum, or off by accessing Video Options from the Options menu.

The engine blends lighting to add semi-realistic shadows and glowing from light sources. It darkens inside corners, resulting in small spaces appearing much darker. Before Beta 1.3, the feature could only be obtained by modifying the game with the help of MrMessiah's BetterLight mod.

The "Maximum" smooth lighting toggle fixes bugs with stairs. However, this is an optional toggle. The "Minimum" toggle increases performance, but does not fix the bug.

Minecraft has an extensive history when it comes to lighting. Classic's lighting model is simple and only checks whether a block is exposed to the sky. Indev's model is more complex and considers a block’s distance from the nearest sunlight and from the nearest light-emitting block. Alpha’s model is a refinement of Indev's, calculating sunlight and block-emitted light separately and using a different scale of light intensities. An earlier Beta update improved upon Alpha's model by adding the smooth lighting option, and in a later Beta update, the whole lighting engine was again rewritten to be much more efficient, have more detail, and be smooth in transition of lighting differentials.

In Classic, "sunlight" is emitted by the top edge of the map and will hit any block that is under it. It will pass through transparent blocks to light blocks underneath. Blocks that do not receive light are in a dim shadow that remains at the same level of brightness no matter how far they are from a light source.

Each block that emits light has its own luminance value and the light value diminishes by one level each block from its source. If the neighbouring block already has a greater light value, it is ignored. The process is repeated for each block whose light value just changed.

During the day, sunlight has a maximum light value of 15. At dusk, it steadily decreases until it reaches a night-time minimum value of 4 representing moonlight. Sunlight is emitted by the top edge of the map, but does not diminish with distance from its “source”. A block lit by sunlight will be equally bright at any height or depth.

Lighting in Alpha through pre-Beta 1.3 works as Indev and Infdev, except that the scale is different and is not linear.

Sunlight in Alpha has its own light array and a behind-the-scenes optimization to make dawn and dusk smoother: the amount of light from the sky is pre-calculated and saved along with the blocks, because it never needs to change except when blocks are added or removed. During dusk, nighttime, and dawn, a "darkness" value is subtracted from the sky to create the effects of different times of day.

In the Nether, light decreases by 10% each level, rather than the normal 20%. This means it will never be totally dark in the Nether. The minimum light value is 20.59%, providing a permanent dim ambience equivalent to normal world's level 8.

Lighting from Beta 1.3 to 1.7.3 works the same as how it was in Alpha, but is greater optimized to allow smooth lighting.

In Beta 1.8, a new lighting engine was implemented. The new engine has added and changed the following:

As of 1.5, there were several lighting optimizations, including more realistic lighting and lighting interacting correctly with slabs and stairs (Maximum smooth lighting). However, furnaces emitting light from all sides, and black spots in world generation were not fixed. As well, there are now three different levels of smooth lighting: Off, Minimum, and Maximum.

Black patches in world generation and structure generation were fixed in the 1.7.2 update.[2]

In snapshot 12w39a, Dinnerbone fixed black patches in world generation,[3] and began overhauling the lighting systems such as changing the lighting of blocks to allow for directional lighting.[4][5]

World generation issues were temporarily fixed,[6] but Dinnerbone reverted these changes due to performance decreases.[7][8]