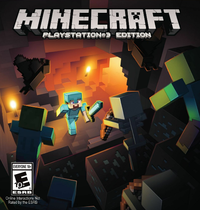 On April 16, 2014, Sony announced the retail disc version of Minecraft PlayStation 3 Edition, set to be released on May 14, 2014 in Europe and on May 16, 2014 in North America. The game otherwise is identical to the downloadable version. Features such as buying or downloading content on the PlayStation Network are the same for both versions and they both update at the same time.[4][5]

The gameplay in Minecraft: PlayStation 3 Edition is identical to the Xbox 360 Edition, with no major differences in content as of update 1.02, except Ocelot usage and the loss of Xbox Live, which is replaced with a PSN account. As part of the free downloadable demo, the tutorial map can be accessed without purchasing the game. You cannot change your skin in the demo version, but you can play split screen.

As with the XBOX 360 and The XBOX One trailer, this one was also created by Hat Films.[6]