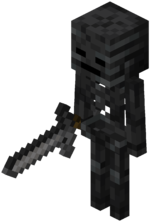 Wither Skeletons, like all Nether mobs, are immune to fire and lava and are not damaged by daylight. Wither Skeletons can also occasionally pick up items, weapons, and tools, or spawn naturally with armor, similar to other undead-type monsters.

When used in the Nether, Skeleton spawn eggs are able to spawn Wither Skeletons instead of the normal skeletons 80% of the time. Similarly, when a spider is spawned in the Nether (whether via spawn egg or a mob spawner), it has a slight chance of spawning with a wither skeleton jockey instead of an ordinary skeleton.